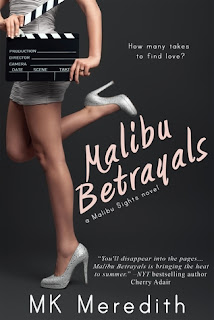 MALIBU BETRAYALS BY MK MEREDITH
Release Date:  July 28, 2015
SYNOPSIS
Can a Hollywood Hunk find real love? Find out in the latest from Select Contemporary...
Her chance to write a whole new ending...
Hollywood screenwriter Samantha Dekker spent the last year picking up the pieces after her husband's suicide. Along with grief, guilt, and tabloid hell, she's had to watch helplessly as the film industry slammed its doors in her face. Now Sam has the rarest of Hollywood opportunities - a second chance...working with the one man she swore never to see again.
Hunktastic A-lister Gage Cutler knows that Sam blamed him for his part in her husband's death. Still, Sam is the one woman he can never forget. All he wants is a second chance of his own - to prove he's not the player she remembers. And Malibu is the perfect backdrop to make a girl swoon.
Except they're not alone. Someone is watching Sam and Gage's steamy off-screen romance with the most dangerous of intentions...
BUY LINKS
Amazon: http://www.amazon.com/Malibu-Betrayals-Entangled-Select-Contemporary-ebook/dp/B0111KOWQ0/
Barnes and Noble:  http://www.barnesandnoble.com/w/malibu-betrayals-mk-meredith/1122252770?ean=9781633753617
Google Play Books: https://play.google.com/store/books/details/MK_Meredith_Malibu_Betrayals_Entangled_Select_Cont?id=RP4ZCgAAQBAJ&hl=en
Ibooks:  https://itunes.apple.com/us/book/malibu-betrayals-entangled/id1016399749?mt=11
Kobo:  https://store.kobobooks.com/en-US/ebook/malibu-betrayals-entangled-select-contemporary
REVIEW: MALIBU BETRAYALS BY MK MEREDITH
Malibu Betrayals (Entangled Select Contemporary) by MK MeredithMy rating: 4 of 5 stars
MK Meredith 's Malibu Betrayals is a real page turner.  Just when you think you have it all figured out, you start to realize you may have gotten it all wrong. This amazing story is full of secrets, betrayals, sensuality and a whole lot more. I was very surprised that I enjoyed it so much.  Sam and Gage reside in a world that is based 100% in make believe and they have to weed through what is truth and what is fiction.  Malibu Betrayals is a dangerously intriguing love story that will have you guessing until the very end.  I received an ARC of this story in exchange for an honest review.(www.goodreads.com/review/list/25556913-isha-coleman)