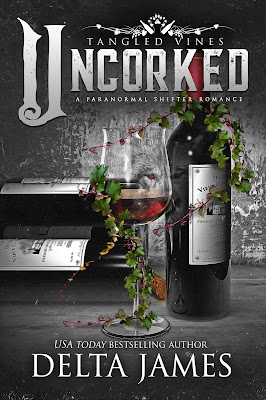 When Hunters strike at the wrong prey, Damian Steele will stop at nothing to claim the ultimate prize… his fated mate.

On the backroads of Italy, a fatal accident takes the lives of three of the four people in the car. The only survivor is an unconscious Kinzie Edwards, who is mistakenly identified as her twin sister. In a targeted act of violence, Kinzie loses her sister, Kayla, and her humanity.

Damian is the brooding Alpha of the Sonoma Pack and the head of the Luna de Lobo Vineyard on the California coast. When Hunters strike at his people, Damian rushes to Italy to care for the mate to his omega. Except it isn’t Kayla he brings home.

While Kinzie hovers between life and death, a powerful change within her DNA occurs and she wakes as a wolf. Kinzie knows nothing about wolf-shifters or fated mates, unlike her sister who had been a wolf-shifter.

Thirsting for answers and revenge, Kinzie leaves the safety of Damian’s embrace to confront those who murdered her sister. Can Damian reach her before the Hunters claim her as another trophy?

Delta James has four or more novellas per year for her VIP readers group. Want yours? Copy and paste this link in your browser!

Delta is always happy to hear from her readers and responds personally. Reach out today!

All the riches this world has to offer belong to me.
Whatever I want, I get.
And those who stand in my way?
They don’t live long enough to tell their tale.

I’m a villain thriving in darkness, who seeks no redemption.
A hunter who sets his sight on an irresistible prey.

There is a monster reigning inside me who covets to stake his claim and drag her to his cave.
A beautiful siren who ends up captured by a possessive beast and locked in his castle.

She will be my wife.
No matter what I have to do in order to achieve it.

V.F.Mason always loved reading books and had quite a few fights with her momma over the genre she liked (romance, duh!) She studied filmmaking and thought that would feed her desire for stories, but that didn’t happen. Finally, when she was tired of all those voices in her head, she sat down and wrote a book. It was a huge decision to make and she thanks her friends and family for supporting her in it. When she is not writing, she can be found with her friends doing all sorts of crazy things or reading recent romance books that were written by her favorite authors. 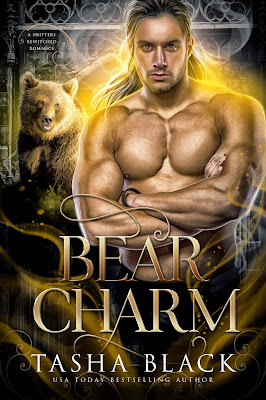 I was the worst witch at Primrose Academy.
Until a guardian chose me for his mate…

Every day is a battle to keep my place. The Legacy witches laugh at my magical accidents. My own friends cringe when I get called on in class. And even though the professors say powers like mine are difficult to restrain, I know it’s only a matter of time before I’m stripped of my school colors and sent home in shame.

I might be able to harness the weather one day, but right now I can’t even control my own life.

The only escape is in my dreams, where a beautiful man with golden eyes haunts my mind and warms my body. But it’s only a dream…

Until the night of the Choosing Ceremony, when he appears in real life to make me his mate.

But as much as I crave his touch (and I really, really do), my friends need our help. If we don’t hunt down a list of magical ingredients in time to stop a dangerous spell, hell will rain down on us all.

The situation is desperate enough that they even want ME, and my jacked up, unpredictable magic, fighting on their side.

But my power comes at a terrible price - a price that could be fatal to Reed. So if I love him, I have to resist the mating bond.

If only the stubborn bear shifter wasn’t willing to face down death itself to make me his.

Shifters Bewitched is a brand-new Paranormal Romance series from USA Bestselling Author Tasha Black. Be sure to read them all:

Tasha Black is a USA Today bestselling author of Paranormal, SciFi & Fantasy romance. She lives in a big old Victorian in a tiny college town. She loves reading anything she can get her hands on, making up stories, and sipping pumpkin spice lattes.

She's young and sassy. He's ancient and sexy.
But will the truth they're seeking together destroy them both?
Rune of Passing by Lia Davis has joined the Immortal Keeper universe today!

GET IT NOW!
One-Click: https://amzn.to/3ebsS5Z
#nowlive #newbooks #availablenow #newrelease #releaseday #releaseblitz #bookbirthday
#paranormalromance #vampireromance #romancenovels #romancebooks #immortalkeeper #bookbuzz #bookclub #booksbooksbooks #bookish #bookblogging
BLURB:
Natasha Spencer isn’t in a hurry to get another guardian. Her first, a vampire who raised her as his own daughter, is gone and it nearly broke her when he was killed. She isn’t ready to put her trust and life in someone else’s hands. She’s just fine on her own, working a normal job and living a semi-normal life.

However, Nat is anything but normal. Having a gift that allows her to see into other dimensions and create portals doesn’t mean she needs a vampire to look out for her. She can take care of herself.

Just like she took care of the demon who killed her father. Or so she thought.

Her world takes a deadly turn when the murderer comes after her and almost succeeds in killing her. But an immortal savior comes to her rescue.

Zakariya Hawkins isn’t a random hero saving Nat from a demon attack. He’s her new guardian, and the only man that makes her blood run hot. If he thinks she’ll just hand her heart over to him, he has another thing coming.

But she needs him to help find out the truth behind her father’s murder. Doing so tears down her defenses and opens her heart. But will the truth destroy them both?

Lia makes her home in Northeast Florida where she battles hurricanes and humidity like one of her heroines. When she's not writing, she loves to spend time with her family, travel, read, enjoy nature, and spoil her kitties.  She also loves to hear from her readers. Send her a note at lia@authorliadavis.com!