AVAILABLE 10/19: TEMPTING THE NEW BOSS (SLEEPING WITH THE ENEMY #3) BY ANGELA CLAIRE. 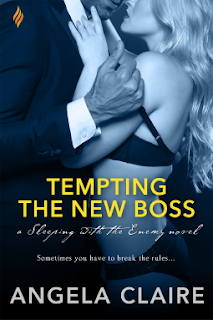 Sometimes you have to break the rules…

When Camilla Anderson loses her job just as a position at Talbot Inc. opens up, there's no way she's questioning the lucky break. Working for the quirky, reclusive CEO will pay off her student loans within a year, and they're flying to Europe in his private jet.

Mason Talbot isn't good at talking to women. Well, to anyone, really. But when his new lawyer boards his plane, biology kicks in. But he can't tell if her adverse reaction is to him or his painfully awkward attempts at flirting.

As the flight gets bumpier, Mr. High IQ gets calmer. And…he holds her hand? Maybe the guy is redeemable after all. As soon as they land, she'll have to teach her endearingly awkward new boss how to seduce a girl properly.

That is, if they don't die in a fiery plane crash first.

REVIEW: TEMPTING THE NEW BOSS (SLEEPING WITH THE ENEMY #3)
BY ANGELA CLAIRE


It's not everyday that you encounter a character like Mason. Mason has a head for business, a body for sin and an aloof attitude that he hides behind to conceal his insecurities. Camilla sees the man behind the genius. As she gets to know him all she wants to do is help to build his confidence. I liked Tempting the New Boss. Mason was an Alpha in training that found himself when he met Camilla. He needed her guidance to help him develop the courage to speak up and never doubt the choices he had to make. She needed him to show her that she was more than a face in the crowd. Angela Claire took a different path with this read but that's what I feel made it all the more romantic. Received an ARC in exchange for an honest review.