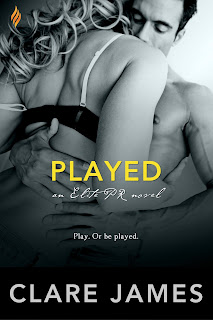 Play. Or be played.

The music should be enough. End of story. But Aaron Major is finding out it's not, and now his agent has hired a firm of suits to help launch his debut album, turning his life into a goddamn circus. Smile here. Play there. Be nice. Well, screw that. If Aaron wanted to spend his time shaking hands and kissing babies, he would've gone into politics.

Helping launch the career of country singer Aaron Major should be a cakewalk for PR pro Melody Sharp. Aaron is charming, sexy, and oh-so-appealing when he's on stage. Off stage, though, he's her worst nightmare. A stubborn, ornery, reclusive nightmare without a lick of business-or fashion-sense. The only way he's going to make it in music is with a serious makeover-and quite possibly a personality transplant.

Soon, they're engaged in a game of give and take, and though it's Melody calling the shots, it's Aaron who holds all control...


Requested a copy of Played because in the past I had the chance to read Caught, another Elite PR novel and enjoyed it so much. Played fell short for me. I liked the characters separate but as a couple did not feel any chemistry. The concept of the story was clever, it could have been a really sexy read. The struggle for power between two people who love being in control. However, the story got off to a slow start for me and by the time it found it's legs again the story was almost at the end. Played has potential. Any female who can hold her own when dealing with a stubborn male is a plus in my book. I received Played in exchange for an honest review. My rating would be three stars.