COMING 10/19: HIS FANTASY GIRL (THINGS TO DO BEFORE YOU DIE) BY NINA CROFT. 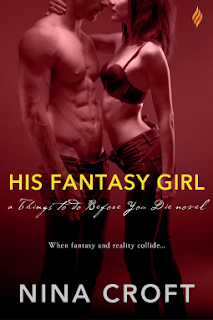 When fantasy and reality collide...
There's nothing like a near death experience to make a guy reassess his life. And that's exactly what nightclub owner Logan McCabe decides to do, starting with looking up the girl he spent one wild night with eleven years ago, right before his life turned to crap. He spent a year fantasizing about her. Now he's ready to see how reality matches up.

Imogen Parker is a perfectionist. She's only strayed from the straight and narrow once in her life, on her eighteenth birthday. It was supposed to be one wild night with a totally unsuitable man before she settled into her sensible future. Instead it changed her life forever.

Logan might still be the sexiest man Imogen has ever seen, but a dirty-talking, tattooed, ex-con is the last thing she needs in her perfect life. He claims she's his fantasy girl, but what he doesn't know is she's also the mother of his ten-year old daughter...

REVIEW:  HIS FANTASY GIRL (THINGS TO DO BEFORE YOU DIE)
BY NINA CROFT

His Fantasy Girl by Nina Croft


Life can turn on a dime. The companions chosen and the choices made play a huge part in the direction our lives take. His Fantasy Girl and Nina Croft brought that point to the forefront with this story. Two complete strangers actions and decisions have repercussions that touch not just their lives but others as well. Logan is a good person but has allowed the influences of others and thoughtless actions to dictate his life. Imogen has allowed her life to be chosen for her instead of following her heart. Out of a spontaneous act comes a beautiful gift. His Fantasy Girl is the journey every person takes to become the individual they were meant to be. Nina Croft has created a story full of deep emotion but is well worth the read. I received an ARC in exchange for an honest review.