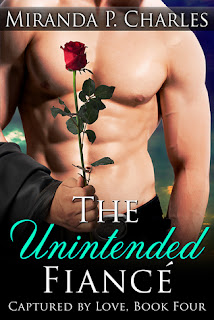 THE UNINTENDED FIANCE' (CAPTURED BY LOVE #4)
BY MIRANDA P. CHARLES

He arranges a fake engagement to win against his business rival.

Bradley Mead has one overriding goal: to succeed over his fiercest business enemy. To boost his chances of winning a lucrative contract over his competitor, he must first assure his potential client that he is not after the client's new wife--a woman he used to date and who still loves to flirt with him. To aid his cause, he asks Erin Baker, his sister's beautiful best friend, to be his pretend fianceé. But Erin soon becomes a pawn for his archrival's underhanded tactics... and he finds himself torn between winning in business and following the dictates of his heart.

She doesn't expect to fall for her fake fiancé.

Erin Baker believes she is now immune from Bradley Mead's charms. After all, her secret crush for him when she was still a teenager is long gone. When an ex-boyfriend becomes a new work colleague and starts annoying her, accepting Brad's proposition to be his fake fianceé for a short time seems like a great idea... until she discovers that she's been lying to herself about her feelings for him. Can she ever win the heart of the man who has never loved her back, and shows no intention of ever doing so?

The Unintended Fiancé can be read as a stand-alone or as Book 4 of the Captured by Love series. The author recommends reading the books in order to fully enjoy the series.


Captured by Love was the perfect moniker for this series as a whole. Miranda P. Charles has written a series of books that steal the heart with emotion charged stories that are on fire. The Unintended Fiance is my favorite story so far. There has always been unrequited feelings between Erin and Bradley. Erin has always wanted more than friendship. Clueless Bradley has never seen her as more than a friend. When Bradley needs a favor and Erin reluctantly agrees things get complicated. Old feelings surface, emotions become involved and underhanded tactics could put an end to friendship and romance permanently. I received an ARC of The Unintended Fiance' in exchange for an honest review. Ms. Charles put her all into ever story she writes and that can clearly be seen with this story.