We're celebrating the release of WHEN WE FALL by Marquita Valentine! Join in the fun! 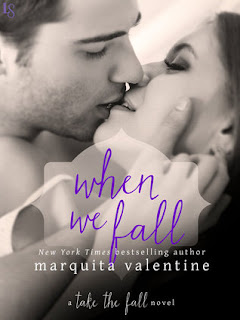 
The last time Piper Ross saw her best friend’s sexy older brother, Jase Simmons, he was being taken away in handcuffs. Seven years later, two things haven’t changed: Piper is still head-over-heels in love with him . . . and Forrestville’s chief of police—Piper’s dad—still hates his guts. So when Piper sees a chance to get close to Jase, she makes her move—literally. As his new roommate, and as the office manager of his tattoo shop, Piper won’t be satisfied until Jase knows that she wants to be his.


The quintessential good girl, Piper is pure temptation for Jase. The only reason he’s always kept his distance is because she’s the last person he’d ever want to hurt. But once he realizes that Piper is ready to take the leap, everything just makes sense. Suddenly Jase feels like a new man—until nasty rumors start swirling and Piper’s heartless father stirs up even more trouble. Now Jase must convince Piper that she wasn’t wrong about him . . . because falling in love never felt so right. 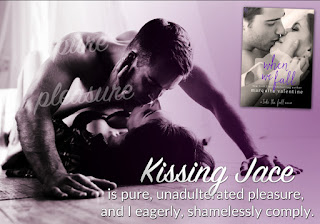 REVIEW:  WHEN WE FALL (TAKE THE FALL # 2) BY MARQUITA VALENTINE

When We Fall by Marquita Valentine


When We Fall is book two in Marquita Valentine's Take the Fall series. I received an ARC of this novel in exchange for an honest review. Jase and Piper's story is one of self torture and unrequited love. Piper has a sweet nature and a pure heart. When she loves, she does so deeply and is not swayed by bias or the good intentions of others. Jase is a troubled young man. A product of his surroundings he let his hot temper lead him down a dead end road. Presented with a new lease on life, he wants to make the people he cares about proud and prove there is more then his past. Piper was a character that had more strength than she was given credit for. She believed in Jase and would not turn her back on him despite his past. With the Take the Fall series Ms. Valentine shows that everyone deserves a second chance. No one is perfect, so who are we to judge. Only GOD has that right. Something we all should remember. 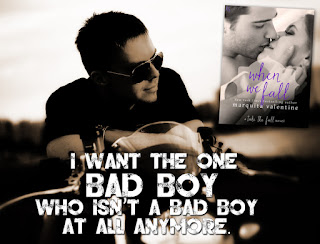 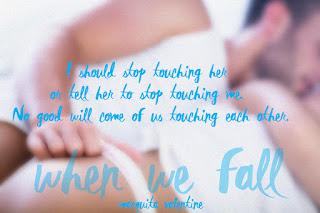 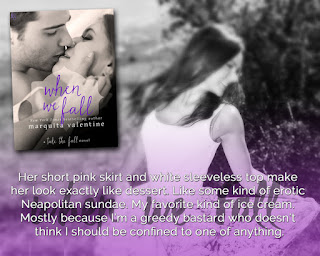 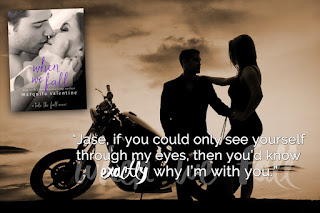 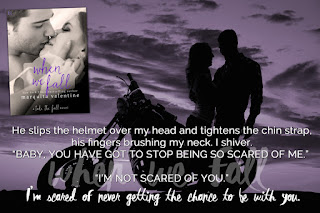 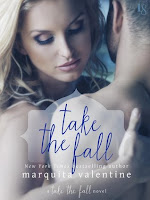 Book Description:
As a teenager, Seth O’Connor went to jail for a crime he had nothing to do with. He took the fall to protect the girl he loved, but the cruel realities of prison hardened him. After doing his time, Seth shuts her out and enlists in the Marines—until his grandmother’s funeral forces him to come home and face Rowan Simmons once again. The woman she’s become puts all his high-school memories to shame, and Seth wants her more than ever. Can he be honest about why he denied her for so long?

After Seth pushed her away, Rowan swore that no man would ever hurt her again. But the boy who broke her heart has become a sexy Marine, capable of fulfilling her every desire—and now that he’s back in town, old feelings are simmering to a boil. Rowan wants to stay strong, even as her body surrenders to his expert touch. She only hopes that by taking him back, she can finally help heal the wounds that drove them apart.

Choices made and lessons learned have a profound affect on the fragile relationship of two young people. Seth is a follower. In love, impressionable and at the wrong place at the wrong time he ends up making a choice he can never take back. Rowan is a scared and lost individual who tries to act tougher than she actually is. One unexpected event on a lone night impacts the lives of so many. Especially these two lovers. Years later will they be able to find their way back to each other or is the damage to great? I received a copy of this novel in exchange for an honest review. Take the Fall is a story of redemption, forgiveness and love that is emotionally gripping. Each character had to grow up before they could make the situation better for themselves and each other.