"Love is never easy and Ferrell refuses to gloss over the pain to get to the happily ever after.

I don’t want him. I can’t do this. That’s what Cohen’s ex said after their son was born, leaving him a single father. Now, his world consists of two things: Noah and his bar. Until one night, he takes Noah to the hospital, and the ER doctor is his ex’s sister, Jamie. Though he’s reluctant at first, Cohen allows her to see Noah. As Cohen and Noah begin to spend time with Jamie, it’s apparent that she’s nothing like her sister. Cohen knows falling for Jamie is wrong, but desire doesn’t always fade away. As soon as they cross that line, nothing will be the same and everything will fall apart. And it does.

"Stirred shakes up the heart while putting the hormones on high alert. Cute and steamy give emotions quite a beating but the beauty of hope never stopped lighting the way." - (Isha C., Blogger, Reader, Reviewer - Hopeless Romantic)

A see yourself out note isn't how you want to celebrate the morning after your first one-night stand. The first time Archer and Georgia met, she blocked him in a parking spot. The second is a fender bender. The third at a bar, drinking away their problems, and finding their way to his bed. She never expected to see him again. That changes a month later when Archer is introduced as Georgia’s brother’s business partner. In need of a job, Georgia is hired at their bar, much to Archer's dismay. They hate each other. They’re off limits, but everytime they’re together, flashbacks of that one night shakes through them. They push, they pull, until one of them breaks.

"Under your skin and into your heart stays forever on your mind. Georgia and Archer dare to be vulnerable, have to be frustrating and refuse to be forgotten." - (Isha C., Hopeless Romantic)

Lincoln went from a penthouse to sleeping in a prison cell—from the VP of a million-dollar empire to a felon. All for a crime he didn’t commit. Now that he is free, he vows to stay out of trouble. The only problem? His new co-worker, Cassidy, is trouble wrapped into a bow. After moving towns for a fresh start, Cassidy has sworn off relationships … until she meets her Prince Charming … fresh out of prison. The longer they work together, the more their relationship moves from co-workers to friends to … lovers. And then it all falls apart.

"TROUBLE looks a lot like love. Straight Up is a romance worth indulging in. The good, the bad and the ugly come together to create an irresistible, unforgettable, MUST READ story." - (Isha C., Blogger, Reader, Reviewer - Hopeless Romantic)

Things Grace never thought would happen: meeting her boyfriend’s secret wife, finding out she’s pregnant with his baby, and faking a relationship with her best friend to keep the truth from her family. Things Finn never thought would happen: becoming best friends with a woman the total opposite of him, pretending to be her baby daddy, and falling in love with her. The more they fake it, the more they forget it’s only temporary. If only they’d known it’d change everything.

"Grace and Finn have been tip-toeing around my emotions since their first fiery introduction in Stirred.  Grace and Finn take emotions on a quite the chase. Hard to put down, heartbreaker.

What's the best way to get back at your cheating ex? Give every guy who hits on you his number. That's what Lola did when she met Silas. Little did she know, they'd see each other again. One run-in leads to another. One fake date leads to a friendship. That friendship leads to feelings. Everything changes and falls apart when one of them asks for more. Can their friendship survive ... or will love destroy them?

"Fall in love with a duo that's more than a little rough around the edges, but proves to be all heart in the end. Last Round is a "can't put down" read. The Twisted Fox series delivers potent, irresistible romance." - (Isha C., Blogger, Reader, Reviewer - Hopeless Romantic) 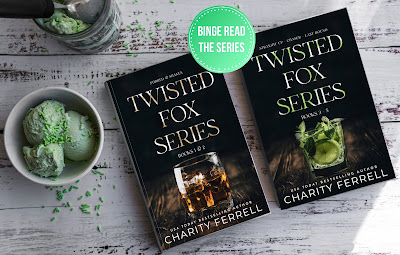