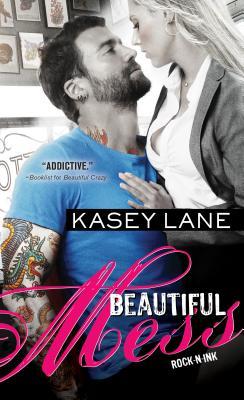 Jackson Paige was, in fact, Jax Pain, the drummer of Manix Curse.

That thing in Jami's chest tightened, making it hard to breathe.

When attorney Jami Dillon strides into the conference room to meet her new client, she's stopped in her tracks by an all-too familiar figure. Jackson Paige. He's her tall, tattooed, and sexy as hell hook up from law school-who also broke her heart.

Jackson Paige, aka Jax Pain, has worked hard to put that unfor-frickin-gettable fling behind him and the nasty secret that made him leave her. Truth is, life as the playboy drummer of Portland's hottest metal band hasn't helped him to forget the fiery, sexy woman who stole his heart. Lucky for him, Jami was just hired as his band's new attorney. But when he sees the look on her face when she realizes who her new client is, Jax wonders if maybe being this close to her again isn't such a great idea. The explosive chemistry is there, but so are the dark secrets...

How can a reader, particularly a female reader, not respect an author who writes stories of empowerment and courage about strong women? Kasey Lane's Beautiful Mess takes a trip down memory lane with rock star Jax and lawyer Jami. Their reunion causes each to own up to some truths about themselves, that could make or break their business relationship and topple their second chance. Emotional reveals, tons of sex appeal and learning what it truly means to rebuild and heal, made reading Beautiful Mess, the real deal.

She kept busy refilling food dishes and drinks, helping Kevan in the kitchen as well as out by the new pool. As she swung open the refrigerator door, she felt Jax’s gaze like little pinpricks on the back of her neck even from across the great room. His gregarious greeting for the soon-to-be newlyweds lifted above the voices and the music moments before she felt his hand touch her waist as she leaned into the fridge, pretending to look for more of…of…something someone had asked for.

“Told ya I’d see you soon.” Jackson’s long fingers wrapped around her waist as his other hand crept down between their bodies and squeezed her butt. She straightened up and spun, pushing the fridge closed. “Did you miss me?”

Yes. She had, dammit, but he didn’t need to know that. In fact, she was going to do everything she could to purge any kind of desire for him from her body.

“Not even a little.” Her voice came out a wobbly gasp, not a real protest. Great. She held up an unopened bottle of cranberry juice. “If you’ll excuse me, Kevan’s waiting for her juice.”

“Liar,” he laughed as she untangled herself from his long arms. “Looking good, sunshine.”

She hadn’t thought about him at all when she’d selected the pale pink sundress from the very back of her closet. Not once. Okay, maybe just once.

Resisting the urge to preen in front of him, she snorted. He laughed again and leaned over and kissed her cheek before she could pull away. Her face heated as she glanced around and realized almost everyone had made their way out to the pool.

They were alone. Good.

They were alone. Not good. Whenever she was alone with Jackson Paige, bad things happened.

Well, things that felt good, but definitely were bad.

Me, too. Shit. He was confusing her and invading her personal space.

“Not my problem, Jackson,” she said, turning to grab a veggie platter to take out to the party with the bottle tucked under her arm.

“See, I think it is your problem. You made it your problem when you kissed me.” He stepped in front of her, barring her way and blocking her view of the party with his wide shoulders. “Have I mentioned how much I love it when you say my full name like that?”

“I can assure you I don’t say your name in any special way.”

“You say it all prissy and posh. Dragging it out, letting it roll off your tongue, like a peppermint or butterscotch candy. Do you think of candy when you say my name, sunshine?”

She brushed her bangs out of her eyes. Maybe to buy herself a second. Maybe so she could see his eyes better. “I certainly do not,” she said crisply, ignoring the visions of lollipops and her tongue and his cock…and…dammit, she was doing it again.

He took his finger and softly ran it across her forehead and down her cheek, mimicking her movement. Only his finger drew a hot line, a river of lava, across her face. God, his heat was going to devastate her again if she wasn’t careful.

“You do, sunshine. I have a proposal.”

Screw his proposal. He’d thrown away any chance he had with her long ago. Didn’t matter how melty he made her feel when he was near. Jackson was trouble. With a capital T. And she was not going there again.

“Apparently you’re delusional. Get out of my way.”

“No?” Her pulse pounded in her ears, and her cheeks warmed again, but for a totally different reason this time.

“No.” The smug look on his face finally threw her over the edge. She set the platter and the bottle of juice on the counter, then poked her finger into his chest.

“I can’t even stand to be in the same room with you. Who the hell do you think you are? You left me. There is nothing for us to discuss.” Heat rolled off his body, combining with her surge of anger, creating a dangerous cocktail of lust and rage that she hadn’t allowed in her life for a very long time.

He wrapped his hand around the one finger she still held to his chest and lifted it to his mouth. She stared, frozen, as his lips surrounded her finger and sucked it in. Holy shit.

Her breath got stuck somewhere between her lungs and her heart. A low moan escaped her throat before she could tamp it down. His eyes never left hers, and the warm glove of his tongue slowly ground down every sharp edge she had. Her heart slowed and skipped three beats—one, two, three. Her eyes closed—she couldn’t stare into the warm chocolate depths of Jackson’s eyes for one more second or she’d be done. It would be game over before she even had a chance to forfeit.

He released her finger from his lips, but reached up to grasp it in his hand. “I keep telling you it isn’t over between us,” he muttered in her ear. Jami’s eyes snapped open and she yanked her hand back from him. “But you’re right. I owe you an explanation. Over dinner.”