SPOTLIGHT: TALK COWBOY TO ME (LUCKY COWBOYS) BY CAROLYN BROWN 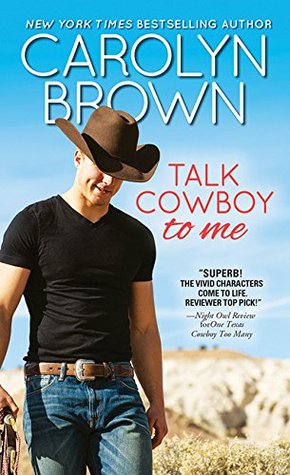 TALK COWBOY TO ME (LUCKY COWBOYS) BY CAROLYN BROWN

One cowboy. One cowgirl. One ranch.
Who will win the Double Deuce by the Fourth of July?

Adele O'Donnell knew that Double Deuce Ranch had to be hers the second she walked onto the property. Freshly divorced, she sees it as the perfect spot for her and the kids to start a new life. Remington Luckadeau was always a carefree playboy...until his suddenly orphaned nephews became his responsibility. The Double Deuce Ranch would be the perfect place to raise two boys. But some fiery woman is fighting him for it, and Remington is not sharing-no matter how the sparks fly when he and Adele are together.


REVIEW:  TALK COWBOY TO ME (LUCKY COWBOYS) BY CAROLYN BROWN

Talk Cowboy to Me by Carolyn Brown


ARC Review: Talk To Me (Lucky Cowboys) by Carolyn Brown

With requisite charm and the standard helping of tender loving care, both author and story set up residence within the heart and I didn't mind having to share. A newly single mother looking to start anew, discovered the perfect remedy to chase away her heartache blues. A newly minted guardian is looking to change his ways. If only he could get his heart to listen to what his mind is trying to say. Carolyn Brown took The Brady Bunch and placed it within the wild west, and although I'm a fan of whatever she does, Talk to Me placed above the rest. Ms. Brown has a sixth sense with matters of the heart. That special talent manages to set her apart. Loved it.

Original post: ishacoleman7.booklikes.com/post/1536472/spotlight-talk-cowboy-to-me-lucky-cowboys-by-carolyn-brown
Posted by Isha C. at 10:02 AM