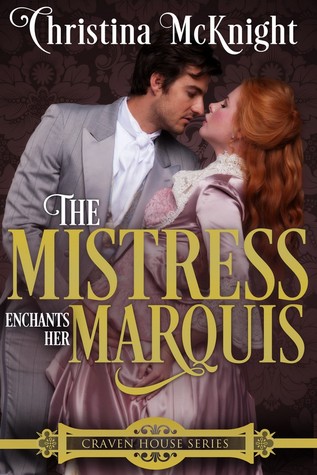 THE MISTRESS ENCHANTS HER MARQUIS (CRAVEN HOUSE) BY CHRISTINA MCKNIGHT

COURTSHIP WAS NEVER SO SCANDALOUS

The grandson of an unconventional marquis and son of a notorious woman, Elijah Watson, Marquis of Ridgefeld, has spent most of his life outside of London. His atypical upbringing has left him longing for roots and a traditional family life, and he’s determined to live his life above reproach. When he meets Miss Samantha Pengarden, he believes he’s found the woman he wants to marry—except she has other far more sensual ideas for him.

Known throughout the ton as the illegitimate rebellious daughter of London’s disreputable Craven House Madame, Samantha has never had to face the world without her shy twin by her side—until now. Her sister’s marriage and the return of her blackguard father leaves her alone and adrift. When Elijah agrees to escort her to the town’s most infamous establishments, she thinks she’s finally found a man with a taste for scandal and a knowledge of matters of the flesh.

But she never counted on Elijah being so honorable. When Samantha is listed as the mistress of the Marquis of Ridgefeld in White’s betting book, her reputation is in ruins—and only Elijah can save her. Can two total opposites come together for a love certain to last a lifetime? 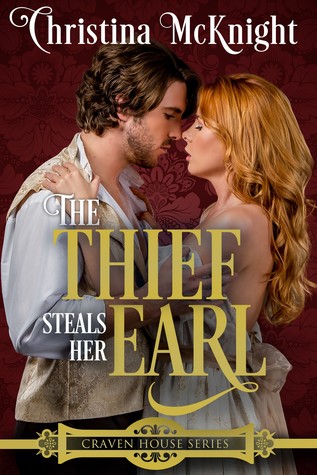 THE THIEF STEALS HER EARL (CRAVEN HOUSE) BY CHRISTINA MCKNIGHT

Following the passing of his father and an unforgivable act by a family member ending in near ruin for his family, Simon Montgomery, the new Earl of Cartwright, is forced to return home without finishing his education. However, that doesn’t stop Cart from absorbing every morsel of knowledge he can.

Unfortunately, doing so and applying his every moment to restoring his family’s lost heirlooms while seeing to his sister’s upbringing and attempting to wrangle his mother’s frivolous spending habits has made him somewhat of a recluse, a man unsure of how to live life unless it’s focused around academia, order, and routine. But what happens when Cart is faced with a woman as intelligent as he but far more cunning?

Miss Judith Pengarden has lived her entire life under her eldest sister’s firm yet loving guidance. When she discovers her family is in jeopardy of losing their home, Jude decides to use her skills to help them pay off their unsettled debts. However, when Jude attempts to steal from the wrong house, she finds herself alone, locked in a dank room at the night watchman’s residence, and she vows to stop thinking so spontaneously and risking her family’s name to scandal. Unfortunately, there are some loose ends that need to be tied up before she can. Luckily for her, however, she may have just met the man who can help her family and also steal a piece of her heart.

When Jude meets Lord Cartwright at a London garden party, he seems the perfect man to solve all her problems—a recluse unfamiliar with London Society and studied in antiquities. A lord like none she has met, Jude soon realizes that Cart is more valuable to her than any painting, sculpture, or vase. But when she’s caught in possession of Cart’s long-lost family heirloom, completely unaware of what it really means, can she convince him that things are far from what they seem? That despite the deceit and subterfuge, her heart is in the right place. With her family…and with him.