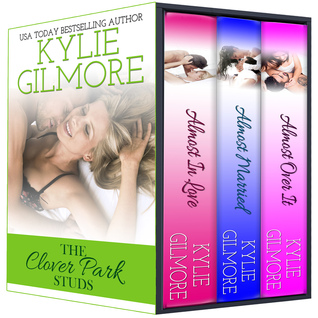 The Clover Park STUDS Boxed Set includes three full-length novels: Almost in Love, Almost Married, and Almost Over It. Each is a stand-alone story with some Clover Park Series favorites popping up too!

Successful entrepreneur Barry Furnukle is ready to take things to the next level with the pink-haired neighbor he adores. But when his attempt to woo her with the world’s most “awesome” date (birding and fro-yo) lands him in the friend zone, it’s time to unleash his inner stud.

Stephanie Moore’s boyfriend, the adorably geeky math teacher, Dave Olsen, has husband material written all over him. One teensy problem—she's still technically married. When she demands a divorce from the rock star husband she hasn't seen in five years, he shows up on her doorstep wanting a second chance. Mathlete vs rock star? Game on!

Book 3: Almost Over It

Ex-bad boy Will has been living a life of penance ever since he crashed his car, nearly killing his brother. Jasmine is just one more reminder of the life he doesn’t deserve, but when one perfect kiss sets them on the slippery slope toward love, they both fear it will end with a crash. What do you do when the one person you can’t live with is the one person you can’t live without?


Kylie Gilmore. The name alone says it all. I know that I am in for a good time when I pick up her novels. Her stories are short enough to whet your appetite and long enough to fall in love with. Not only am I always entertained but the little antidotes (lessons) thrown in along the way add flavor to these sweet reads.

Almost in Love - Barry is so adorably clueless. He's so worried about fitting in. That he fails to realize how special he really is. Ms. Gilmore conjured up a character that captures a readers attention. His insecurities are what made him sweet and easily identifiable. The definition of perfection. My Rating: 5 stars

Almost Married - Stephanie is stuck in the middle of some heavy testosterone. Talk about complicated. Almost married is a comedy of errors. Secret marriages, kept in the dark boyfriends and confused emotions headline this vortex of fun. Who will she choose. Personally, I know my pick but I think Stephanie needs to exercise a little self-acceptance and maturity before she creates more chaos. My Rating 3.5 stars

Almost Over It (Clover Park STUDS, #3)

Almost Over It - Will broke my heart. Bad decisions in his past, left him with guilt. Almost Over It would make a wonderful serial. Somewhere along the way it lost the humor and became a story of regret and hope. There are so many reasons that I am a fan of Ms. Gilmore. Jasmine and Will are just two of those.