We are so excited to be kicking off our 7 nights of laughter where we will be highlighting the queen of laughter, Tawna Fenske, her laugh out loud until your stomach hurts books, a special sale and giveaway! So kick back, relax and get ready to fill your ereader with books guaranteed to liven up your reading time.

Pick up Marine for Hire for the limited time steal of just $1.99!

She thought she’d sworn off military men for good…

Sam Kercher is every inch a wickedly hot Marine. Tall. Sexy. Lethal. When his best friends call in a favor, Sam is forced to face an entirely new line of duty—playing nanny for their newly divorced sister and her squirming seven-month-old twin boys. If Sam can dissemble an M16 in his sleep, diaper duty should be a cakewalk…right?

Unfortunately, Operation Nanny isn’t quite that simple. Sheridan has sworn off overbearing military men, so Sam must protect her from her dirtbag ex without revealing just how much he has in common with her brothers. Or that he’s been ordered not to touch her. Ever. Problem is, Sheri’s one hell of a gorgeous woman, and Sam wants her bad.

Protect the girl. Care for the babies. Hide his identity. And keep his hands off. But even the most disciplined Marine has weaknesses...and Sheridan is one Sam might not be able to resist. 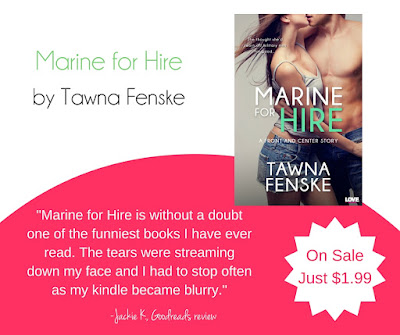 Mac turned back to him, and Sam caught his own disheveled image in the reflection of his buddy’s glasses. He had a streak of mud on one cheek, and he hadn’t shaved all week.

“You like kids, right?” Mac said. “I mean, you have all those nieces and nephews.”

Sam frowned. “Sure, kids are great. My sister’s having another little girl in April.”

He nodded as though making a mental list. “Can you operate an oven?”

“Microwave. Oh, and I baked brownies once. Laced ’em with Ex-Lax as a prank for some SEAL buddies at a party.”

“How do you feel about Kauai?”

Sam raised an eyebrow and wondered—not for the first time—if Mac had gone crazy. “Is this some kind of psych exam where you’re going to show me ink blots and ask whether I fantasize about badgers wearing men’s underwear?”

Mac folded his arms over his chest. He didn’t answer the question. “You remember my sister, Sheridan, right? I think you met her once at a party in college.”

At the mention of Sheri’s name, Sam felt several pints of blood drain from his brain and pulse toward other extremities. He thought about those thick, chocolaty curls and those huge brown eyes, and that perfect, heart-shaped ass and—

“I think I remember her,” he said, straining to keep his voice casual. “Blond, right?”

Sam blinked. “What? Didn’t they just have a kid?”

“Two kids. Twins. Seven months old, and Lieutenant Limpdick ran off with a stripper he met in Arkansas. We’re dealing with the situation.”

He refrained from asking who “we” might be or what “dealing with the situation” entailed. Probably best not to know. “Weren’t they stationed in Honolulu?”

Mac nodded. “Sheri’s still there. Well, on another island now. Kauai. She has a friend there, and she just got a job as an accountant on the Pacific Missile Range Facility.”

“Yeah. Great pay, good bennies. But she’s a single mom, and she needs a nanny. A good nanny. Someone who can cook and who’s great with kids and housekeeping and M40 sniper rifles.”

“You got that job description on Craigslist?”

“And maybe black-belt level karate skills,” Mac continued, ignoring him. “And the ability to use power tools.”

“You can’t be serious.” Sam shook his head, propped the chain saw against a stump, and rubbed a smear of mud off his forearm.

“Why not? You’re supposed to report for your new command in Hawaii in a couple weeks anyway. In the meantime, Sheri needs someone to watch out for the twins. And her.”

He touched one hand to the utility knife on his belt and stared Mac down. Then he remembered it wasn’t possible to stare Mac down, especially since the guy never removed his sunglasses.

He tried reasoning instead.

“Aren’t there services for this sort of thing? There have to be a thousand people more trained to be nannies.”

Mac leaned against a tree, his arms still folded. “No one with your unique qualifications. And not anyone who happens to owe me a favor.”

Sam sighed, already knowing how this would end up. “I appreciate you saving my life in Baghdad. I do. But can’t I just buy you a beer or a car or something?”

We all know where Sam ends up but don’t miss what happens when he steps in as many for Sheri. Pick up your copy for just $1.99!

Tawna Fenske is a fourth-generation Oregonian who writes humorous fiction, risqué romance, and heartwarming love stories with a quirky twist. Her offbeat brand of romance has received multiple starred reviews from Publishers Weekly, one of which noted, “There’s something wonderfully relaxing about being immersed in a story filled with over-the-top characters in undeniably relatable situations. Heartache and humor go hand in hand.”

Tawna lives in Bend, Oregon with her husband, step-kids, and a menagerie of ill- behaved pets. She loves hiking, snowshoeing, standup paddleboarding, and inventing excuses to sip wine on her back porch. She can peel a banana with her toes and loses an average of twenty pairs of eyeglasses per year.

To learn more about all of Tawna’s books, visit www.tawnafenske.com