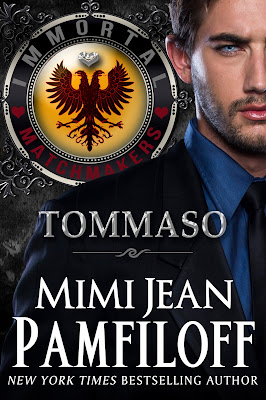 Tommaso Fierro is used to the finer things in life—nice suits, nice car, nice house. Okay, his past isn’t so nice, but that’s in the past. Or at least it was until he blacked out after meeting the woman of his dreams.

Annnd possibly capturing her.
Annnd possibly terrorizing her before she got away.
Annnd discovering that he’s turning into a horrible creature he loathes with all his heart.

Luckily, there’s a cure. Unluckily, it will require him to track this woman down and convince her to give him a second chance. But if he finds her, will she ever believe that he’s really not a monster?

MIMI JEAN PAMFILOFF is a USA Today and New York Times bestselling romance author. Although she obtained her MBA and worked for more than fifteen years in the corporate world, she believes that it’s never too late to come out of the romance closet and follow your dream. Mimi lives with her Latin Lover hubby, two pirates-in-training (their boys), and the rat terrier duo, Snowflake and Mini Me, in Arizona. She hopes to make you laugh when you need it most and continues to pray daily that leather pants will make a big comeback for men.