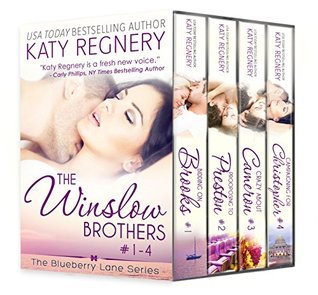 "Katy Regnery is a fresh new voice. I eagerly await every Katy book and I tell everyone I know to read them!" --Carly Phillips, NY Times Bestselling Author

1. Bidding on Brooks: Two good friends. One bachelor auction. When Skye Sorenson agrees to bid on her friend, Brooks Winslow, and wins him, the last thing she expects to lose is her heart.

2. Proposing to Preston: The last thing budding actress Elise Klassan needs is a real-life love affair, but love is nothing if not sometimes inconvenient, and once Preston Winslow glimpses Elise on the stage, he simply can’t stay away.

3. Crazy about Cameron: Margaret Story has always been the unaware star of Cameron Winslow’s dirtiest librarian-fantasies, and Cameron has been Margaret’s secret crush for as long as she can remember. Will the timing finally be right for them?

4. Campaigning for Christopher: When Julianne Crow willfully sabotages Christopher Winslow’s congressional campaign, he knows a hate he’s never felt in his life. But when Julianne does everything she can to make amends, Christopher can’t help but fall.

_________
*All books in The Blueberry Lane Series can be enjoyed as standalone novels.*

Breaking Up with Barrett
Falling for Fitz
Anyone but Alex
Seduced by Stratton
Wild about Weston
Kiss Me Kate
Marrying Mr. English

Jonquils for Jax
Marry Me Mad
J.C. and the Bijoux Jolis

Bidding on Brooks - What’s not to like about Bidding on Brooks by: Katy Regnery? From the first page I was drawn into Brooks and Skye’s adorable dance. Each had fears about falling in love. When they finally discover that maybe they could explore being more than friends-I was so excited for them. Despite the obstacles that kept popping up along the way I wanted them to face their demons and succeed. The auction scenario was hilariously entertaining. I loved the character of Clay, he was just over the top enough to make him believable. Katy Regnery captured my heart with Brooks and Skye’s journey to love in Bidding on Brooks. Am waiting eagerly for the next book in the series. Received an ARC for an honest review.

Proposing to Preston - Preston and Elise were perfection together. The soul deep connection and magnetic chemistry were beautiful to behold. Katy Regnery did a wonderful job of letting the characters become friends and slowly build up to something more. The slow progression into love is what made it so heartbreaking when these two people were apart. Elise was definitely a go-getter when it came to following her dreams and that tenacity was a central part of her character. Preston led with his heart and that is what made me his biggest fan. Proposing to Preston is really something special. Each time I read a Katy Regnery book I grow more fond of her as a writer.

Crazy about Cameron - Crazy about Cameron is less serious and more fun than the previous two books in the Winslow Brothers series. Cameron Loves pushing Margaret's buttons. Whatever gets her to notice him. Margaret considers Cameron to be a nuisance that has terrorized her for as long they have known each other. As she gets older she learns not to take him too seriously. That proves to be her biggest mistake. I liked Cameron. His comedic, easygoing personality covers a well of deep feelings and a heart that seems more fragile than one would expect. Margaret is less confident than she presents and her outer personality proves her protection against her inner anxieties. I received an ARC of Crazy about Cameron in exchange for an honest review. I have read every book in the Winslow series so far. Ms. Regnery's ability to attract readers to her complex characters and poignant stories is why I am a huge fan. I look forward to reading every new release and revisiting prior stories. The personalities of her characters mixed with the combination of her writing style are mesmerizing to behold. One of my favorite authors .

Campaigning for Christopher - DON'T GET MAD, GET EVEN. When it comes to love the gloves come off. The one thing that Julianne and Christopher have in common is the ability to develop tunnel vision. Once they make a decision nothing can alter their focus. That skill can prove an essential asset when you have all the facts but fatal when based on hearsay. Julianne learned this the hard way. She let bias, anger and pride mislead her and wants to make amends, Where Julianne's pride influences her actions, Christopher's heart influences his. Trusting too easily may have cost Christopher everything he worked so hard to accomplish. A little luck, a lot of faith and a guardian angel may help make all Christopher's dreams come true. Campaigning for Christopher proved to be a real pistol in Katy Regnery's arsenal of stories. Neither Christopher or Julianne were willing to back down and that made the story hotter than any erotic novel. I received an ARC in exchange for an honest review.