HAPPY BOOK DAY: A DUKE TO REMEMBER (SEASON FOR SCANDAL) BY KELLY BOWEN 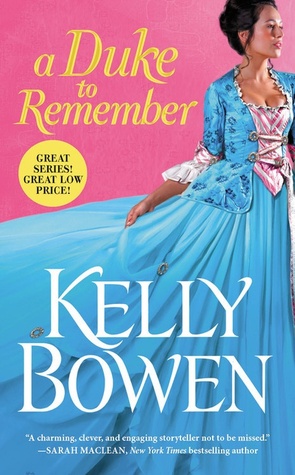 A DUKE TO REMEMBER (SEASON FOR SCANDAL) BY KELLY BOWEN
Release Date: July 26, 2016

Elise deVries is not what she seems. By night, the actress captivates London theatergoers with her chameleon-like ability to slip inside her characters. By day, she uses her mastery of disguise to work undercover for Chegarre & Associates, an elite agency known for its discreet handling of indelicate scandals. But when Elise is tasked with locating the missing Duke of Ashland, she finds herself center stage in a real-life drama.

Noah Ellery left the glamour of the London aristocracy to pursue a simpler life in the country. He's managed to avoid any complications or entanglements—that is, until he lays eyes on Elise and realizes there's more to this beautiful woman than meets the eye. But when Elise reveals her real identity—and her true feelings for him—the runaway duke must confront the past he left behind . . . to keep the woman he loves forever.

REVIEW:  A DUKE TO REMEMBER (SEASON FOR SCANDAL) BY KELLY BOWEN

A Duke to Remember by Kelly Bowen


A woman of mystery gets caught up in a complicated masquerade. Elise has many disguises in her arsenal actress and undercover agent are just a few. The lure of A Duke to Remember for me was Elise. She has so many different identities that she loses a little bit of her own individuality with each one. What a hard way to live. In meeting Noah she starts to gain a better understanding of herself and I think the same could be said of him. I received an ARC of this novel in exchange for an honest review. Not an easy story to get into but it is an exceptional read once given a chance. By the end I was caught up in this tangled up romance.

EXCERPT
“You’re not going to die on me, are you?”  The voice came from lower, almost directly in front of her this time, and Elise opened her eyes, staring up at a collection of clouds scudding across the blue sky.
“Not yet, I think.”  She struggled to sit, her tired muscles still refusing to obey.
A warm hand caught hers and pulled her forward, and Elise was suddenly presented with the most beautiful eyes she had ever seen.
They were smoky green, the color of pine wreathed in mist, the color of still waters that hid great depths.  They were ringed with blond lashes, set in a strong, rugged face that spoke of hours spent outdoors.  Pale blond hair fell around his ears in careless waves, the ends damp where they brushed his bare shoulders.  Incredible shoulders, wide and powerful, droplets of water sliding over the ridges of muscle to disappear down the front of his chest.
Her mouth went dry, and whatever breath she thought she had caught deserted her once again.
He was crouched before her, a look of concern tempered with a half-smile stamped across his striking features. “Hmmm.  Well, if you die, can I have your horse?” he asked.  “As fine an animal as I’ve seen in a long time.”
“My horse?” she repeated.  Good Lord.  Her wits had completely scattered under that smoky gaze.
He glanced over her head up in the direction of the road.  “One of the boys brought it off the bridge for you.”
Elise struggled to draw a normal breath and formulate a thought.  The man was trying to put her at ease.  It wasn’t his fault that he looked as he did.  It wasn’t his fault her body was threatening to make an utter fool of her because of it.
But clearly, it had been too long since she had invited a man to share her bed because she was shamelessly staring at the way his body moved as he shifted.  Subtle shadows carved their way across his torso, created by lean muscle rippling under golden skin. A scattering of dark blond hair covered his chest and trailed down past his navel.  Her eyes dropped further south, and she let her gaze wander over the sharp ridges of muscle that formed a V over his hips before disappearing into the front of his breeches.  His free hand rested on a powerful thigh, long, capable-looking fingers spread out over the top of his knee.  She imagined what those fingers would feel like against her bare skin.  Because she already knew what his arms had felt like beneath her, the hard strength of his body against hers.
When he was pulling you from the water like a drowned river rat, you fool, not drawing you into a lover’s embrace.
A terrible realization struck her with the completion of that thought.  Without needing to check, she knew her cap was gone.  Her braid had come unpinned, and she could feel the heavy weight of her sodden hair on her back.  A glance at her water-logged clothes plastered to her body confirmed her worst suspicions.  When she’d bound her breasts tightly beneath her loose, baggy shirt, they were unnoticeable, but there was nothing unnoticeable about them now.  The bindings had come loose and slid down to bunch at her waist.  Worse, the threadbare fabric of her worn shirt was almost transparent, and stuck to her skin as it was, she may as well have been wearing nothing.  The curves of her breasts were clearly visible, as were the dark areolas of her peaked nipples.
The man’s eyes were still on her face and not on her chest, which Elise was choosing to interpret as a testament to his chivalry, but no one in their right mind would mistake her for anything other than what she truly was.  A woman dressed as a boy.
“No, you can’t have my horse,” she muttered, attempting to peel her shirt away from her breasts with her free hand.  “I need it to flee a lot of awkward questions.”
The man was watching her again.  “They are going to want to know who you are,” he said quietly, jerking his chin in the direction of the voices beyond them.  The understanding she saw in those incredible eyes made her blink.
She managed a weak smile.  “Do you suppose anyone will notice if I just swim back to where I came from?” She was trying to make her mind work, but like her muscles, it seemed lethargic, her usual ingenuity depleted.  “You can tell them that I was a mermaid.”

ABOUT THE AUTHOR
Kelly Bowen grew up in Manitoba, Canada. She attended the University of Manitoba and earned a Master of Science degree in veterinary physiology and endocrinology.
But it was Kelly's infatuation with history and a weakness for a good love story that led her down the path of historical romance.  When she is not writing, she seizes every opportunity to explore ruins and battlefields.
Currently, Kelly lives in Winnipeg with her husband and two boys, all of whom are wonderfully patient with the writing process.  Except, that is, when they need a goalie for street hockey.
Website | Facebook | Twitter | Goodreads

RAFFLECOPTER a Rafflecopter giveaway
Posted by Isha C. at 12:00 AM