AS RICH AS A ROGUE (RAKES & ROGUES) BY JADE LEE

Mari Powel’s fiery Welsh temper is up. Peter Norwood, Lord Whitly, is back in town after six years romping around India making his fortune. Mari blames him for her social downfall and has spent all this time clawing her way back into the ton’s good graces. How dare he show up on his first day back and publicly embroil her in a bet involving long-awaited apologies, illicit kisses, and Lady Illston’s unruly parakeet? Mari is outraged, and is going to show him—and everyone else—what she’s made of. Little does she know, the unrepentant Lord Whitly has been dreaming of her all this time. Now he’ll do anything to win the wager—along with Mari’s heart.

REVIEW:  AS RICH AS A ROGUE (RAKES & ROGUES) BY JADE LEE

As Rich as a Rogue by Jade Lee


What does a man do to appease the woman he loves? Embroil her in a scandal. I received an ARC of As Rich As A Rogue by Jade Lee in exchange for an honest review. For six years Mari has fumed over the hurtful worlds delivered by Peter. Now faced to face with her nemesis she wants retribution. Not an easy feat when Peter can't remember what was said. What ensues is petty squabbling, unwanted attraction and mutual frustration. Once the childish banter wore off, I found the romance to be enjoyable. 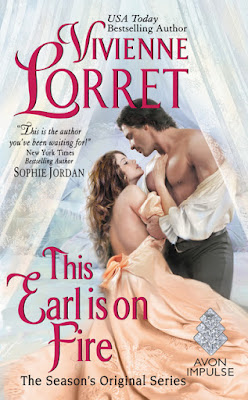 THIS EARL IS ON FIRE (SEASON'S ORIGINAL) BY VIVIENNE LORRET

The sheltered daughter of a country baron, Miss Adeline Pimm comes to London looking for adventure… and finds it in the form of a bloody, unconscious man slumped in the doorway of her family's rented townhouse. Though his identity is a mystery, Adeline is inexplicably drawn to the handsome, injured man and vows to nurse him back to health.

Liam Cavanaugh, the scandalous Earl of Wolford, is startled when he awakens in an unfamiliar bed, wrapped in bandages that hinder his eyesight, with no memory of why he was beaten half to death. Although he can't see the witty young woman who tends to his wounds, her alluring voice--and a single stolen kiss from her soft lips--help soothe his pain. But when he is fully healed, Liam is not ready to let go of the one woman who stirs his deepest longings.

Liam will do whatever it takes to see Adeline again, even if it means giving up his rakish ways. But his disreputable past is not so easily forgotten and his secrets are far more dangerous than he-or Adeline-ever imagined.

REVIEW:  THIS EARL IS ON FIRE (SEASON'S ORIGINAL) BY VIVIENNE LORRET

This Earl is on Fire by Vivienne Lorret


Adeline's tender heart will not allow her to look away from a soul in pain. When she comes across a wounded man in her doorway, she doesn't think twice of the danger to herself. She cares for him, gets to know him and falls hard. Liam, has no idea who the woman with the sweet voice and gentle hands is. Nor does he know what happened to him and why. His one thought is that his soul is lighter than ever and his heart is falling fast for this serene woman. Unfortunately, just because you don't remember doesn't mean the danger has passed. Ms. Lorret, blends adventure, suspense and seduction into a story of love that has unforgettable written all over it.