ONE DAY ONLY!!! LET ME BY CECY ROBSON IS FREE.

FREE FOR ONE DAY ONLY!!! 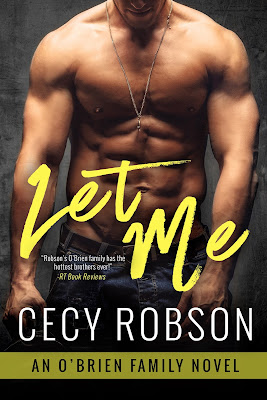 Once he was broken beyond repair. Now this MMA contender is fighting to be a better man—for her. RT Book Reviews proclaims that the O’Brien Family series from award-winning author Cecy Robson “has the hottest brothers ever!” And in Let Me, it is Finn’s turn to discover how love can heal the deepest wounds.

A mixed martial arts star on the rise, Finn O’Brien dismantles his opponents with brutal precision. And yet beneath his fierce persona, Finn is raw from a trauma he’s buried for years . . . until the day his deep-rooted rage erupts and lands him in court-mandated therapy. Finn’s not one to bare his soul, but if talking it out means meeting beautiful women like Sol Marieles, he’ll give it a shot.

Sol is working toward her master’s degree in psychology, and already she feels like she’s in over her head. With an important internship on the line and a scary family situation demanding her attention, the last thing Sol needs is Finn around to distract her. The man is ripped and seriously sexy yet it’s his troubled side that warns her to keep her distance. But their attraction is intense, and he clearly has the heat to see how far and fast their passion takes them.

Alone, Finn and Sol have been fighting to find happiness in their lives. Together, there’s no stopping them as they face their greatest challenges—not in the ring, but in their hearts. 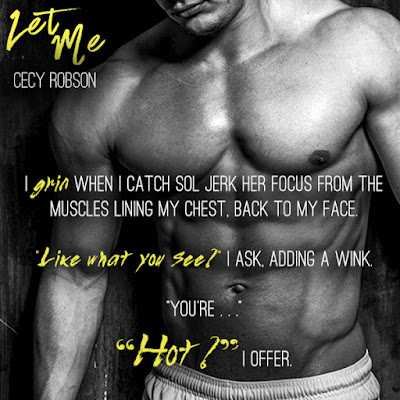 EXCERPT
﻿﻿
“The referee has called a stop to this match at two-minutes and forty-nine seconds into the second round,” the announcer begins. “The winner by TKO, Finn ‘The Fury’ O’Brien.”
The crowd screams and pumps their fists in the air when my hand is raised. I take the few seconds I need to thank my sponsors, my camp, and my brother, because that’s what I’m supposed to do despite the fog clouding my senses. I wish that disconnect had something to do with all the hits I took, but deep down I know that it doesn’t.
I’m back in the locker room before I know it getting stitched up, too many people talking at once. God, I barely hear their questions or my responses. But they’re there and somehow I make it through.
“I’m worried about you, Finnie,” Kill says when everyone piles out.
“Don’t. I’m not drinking tonight. I’m headed home,” I assure him.
“That’s not what I mean,” he says. He’s sitting in a fold out chair, his arms resting against his muscular legs. “I think you need to talk to someone.”
I stretch out my arms. By now they’re so tight, they pull against the bones. “I am. I’m talking to you.”
I don’t have to see him to know he’s shaking his head, or that he’s looking sad, disappointed, and maybe something else, too. “I’m not who you should be speaking to,” he says. “Not for what’s going on in your head.”
“You’re enough,” I say, even though I know it’s no longer true.
“Finn,” he begins.
I don’t wait for him to finish, leaving the changing area and heading toward the showers. “Go find Sofia and Wren,” I call over my shoulder as I strip out my shirt. “See if they’re up for some dinner.”
I don’t remember peeling the rest of my clothes off. That numbness I’ve been feeling too much lately claiming me like a mist until it fully engulfs me. Fuck. It’s like I’ve stopped living even though for the most part I think I’m still alive. 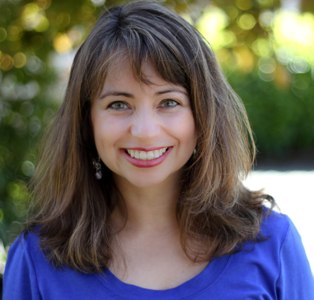 Cecy Robson is a new adult and contemporary author of the Shattered Past series, the O’Brien Family novels and upcoming Carolina Beach novels, as well as the award-winning author of the Weird Girls urban fantasy romance series. A 2016 double nominated RITA®finalist for Once Pure and Once Kissed, Cecy is a recovering Jersey girl living in the South who enjoys carbs way too much, and exercise way too little. Gifted and cursed with an overactive imagination, you can typically find her on her laptop silencing the yappy characters in her head by telling their stories.

Looking for more of the O'Brien Family?
Pick up the Two RITA Finalists
ONCE PURE & ONCE KISSED