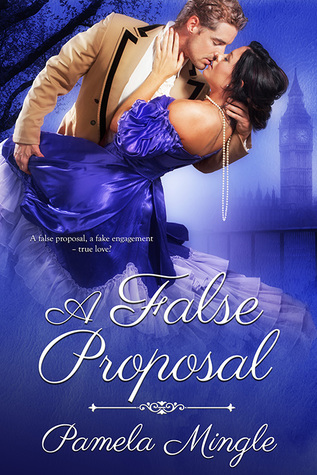 A FALSE PROPOSAL BY PAMELA MINGLE

War hero Adam Grey returns home with a burning ambition to run for Parliament. But he needs the support of the local baronet, who controls the seat. Adam’s plans are thwarted by his dissolute father, who has promised him to the baronet’s daughter in return for forgiveness of his debts. Adam wants nothing to do with marriage or his father’s problems, so he fakes an engagement to Cass Linford—his best friend’s sister.

Cass has been through hell since she last saw Adam. Her betrothed committed suicide, forcing her to withdraw from London society. Heartbroken, she’s given up on marriage. So when Adam suggests a temporary engagement, she agrees. He needs help with his campaign, and Cass can’t resist his charm or the chance to be involved in politics. It all seems so easy, until she finds herself falling in love with her fake fiancé.

A False Proposal by Pamela Mingle


Politics, conspiracy and romance make for a lethal combination. I was so sure that this was another suspense romance. Arranged engagements and intriguing alliances. In need of a break from those I hoped for the best when I turned the first page of Pamela Mingles's romantic read. Ms. Mingle won me over the minute I met Cass. She has every reason to close herself off from emotional connections. Love has left her heart in shambles and with a fear of every opening herself to more pain in the future. I expected her to be a overly sensitive but that was not her. She was fighter and I enjoyed that part of her personality. She was in constant conflict with herself because despite what her head told her, her heart wanted the opposite. The strength of her characters and the amount of heart that went into A False Proposal is what I found exceptional.