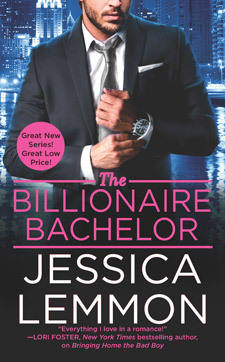 Manwhore. That's what the board of directors-and the tabloids-thinks of billionaire bachelor Reese Crane. Ordinarily he couldn't care less, but his playboy past is preventing the board from naming him CEO of Crane Hotels. Nothing-and no one-will keep him from his life's legacy. They want a settled man to lead the company? Then that's exactly what he'll give them.

Merina Van Heusen will do anything to get her parents' funky boutique hotel back-even marry cold-as-ice-but-sexy-as-hell Reese Crane. It's a simple business contract-six months of marriage, absolute secrecy, and the Van Heusen is all hers again. But when sparks fly between them, their passion quickly moves from the boardroom to the bedroom. And soon Merina is living her worst nightmare: falling in love with her husband . . .

The Billionaire Bachelor by Jessica Lemmon


Convenience is the name of the game. Nothing comes easy in the world of high powered rollers. The people are ruthless. The stakes are cutthroat and the squeamish need not apply. I received an ARC of The Billionaire Bachelor by Jessica Lemmon in exchange for an honest review. Should be used to the marriage of convenience scenario by now, due to the fact that it pops up so frequently in romantic literature. Nevertheless Jessica Lemmon found a winner in The Billionaire Bachelor. The premise is familiar but the voice is all her own. Not always likable Reese can be brutal, but knows how to lay on the charm to get what he wants and his lethal personality proves to be Merina's undoing. With every line and interaction Ms. Lemmon seduces. The heart of the story is not necessarily the love story but the inner growth each experiences along the way. Daring to be different, The Billionaire Bachelor is a new spin on a age old plot. It made the grade in my book. "A" all the way!

About the Author- Jessica Lemmon
A former job-hopper, Jessica Lemmon resides in Ohio with her husband and rescue dog. She holds a degree in graphic design currently gathering dust in an impressive frame. When she’s not writing super-sexy heroes, she can be found cooking, drawing, drinking coffee (okay, wine), and eating potato chips. She firmly believes God gifts us with talents for a purpose, and with His help, you can create the life you want.

Jessica is a social media junkie who loves to hear from readers.

You can also find her here: