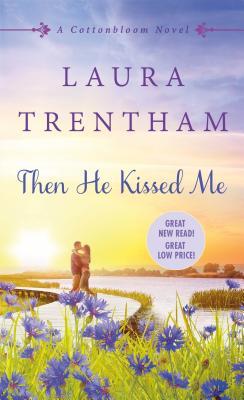 COMING SOON!
READ AND REVIEW
THEN HE KISSED ME (COTTONBLOOM) BY LAURA TRENTHAM

Can two hearts come together in one divided town?

As a boy, Nash Hawthorne spent countless afternoons on the Louisiana side of Cottonbloom with Tally Fournette, wading in the river, peeling oranges and catching frogs. When illness stole his mother, Nash yearned to take Tally and run away—for good. Instead, he crossed the state line to live with his aunt. It was a short distance as the crow flies, but it swept him into a whole new world…

After Nash left, Tally managed to struggle through her own losses without him. But now that she’s crossed paths with him again—at Cottonbloom College, where the grown-up, gorgeous Nash teaches history—she is reminded of their cherished youthful connection…and an attraction that has only gotten stronger with age. Between Tally’s possessive ex and Nash’s snobbish aunt, no one thinks they belong together. In a town torn apart by old resentments and rivalries, can they find their way back to the life they once shared—and turn their long-lost dreams into a real and lasting love?

REVIEW:  THEN HE KISSED ME (COTTONBLOOM) BY LAURA TRENTHAM

Then He Kissed Me by Laura Trentham


ARC Review: Then He Kissed Me (Cottonbloom) by Laura Trentham

As I familiarize myself more with Laura Trentham's body of work, I have come to realize that she has mastered the tearjerkers quite well. It is hard not to feel every heartache, regret and experience every memory presented within Tally and Nash's story. Victims of circumstance, these two close friends could always depend on each other until tragedy caused a divide that proved hard to overcome. Then He Kissed Me examines the strength of friendship and the powerful connection between the main characters. It is a story that conveys stirs up deep emotions but is also a journey of hope, forgiveness and redemption.

KISS ME THAT WAY (COTTONBLOOM) BY LAURA TRENTHAM

A river divides Cottonbloom in two: the upscale enclave on the Mississippi side and the rundown, rough and tumble side in Louisiana. They’re worlds apart—but nothing can build a bridge like love…

Cade Fournette never had it easy Cottonbloom. He stuck around long enough to raise his orphaned siblings and then hightailed it out West—and never looked back. Even though he’s made a success of himself in Seattle, Cade never lost the toughness and the angry edge that helped him survive down South. His only weak spot: the girl he left behind…

Monroe Kirby came from the wealthy side of town, but that didn’t protect her from her mother’s drinking—or her mother’s boyfriend. It was Cade who did that, on a long-ago hot September night, before he disappeared…along with a piece of her heart. Now Monroe is a physical therapist who can fight for herself, and it’s Cade who could use some conditioning when he makes an unexpected return back home. Will he and Monroe pick up where they left off and finally explore their mutual passion—or will the scars and secrets of the past divide them once more?

REVIEW:  KISS ME THAT WAY (COTTONBLOOM) BY LAURA TRENTHAM

Kiss Me That Way by Laura Trentham


ARC Review: Kiss Me That Way (CottonBloom) by Laura Trentham

From the outside looking in, it's easy to judge the have and have nots. Money, power and privilege equals happiness. Poverty equals misery. But is that always the case? With her latest novel, Laura Trentham removes the blinders and gives readers a clear view of how dark and unfair circumstances can be no matter who you are, or what you have. Cade was used to looking out for himself. He had to be the strong one in order to provide for his family. Monroe was his complete opposite. She had an enviable life. A wealthy family that kept her safe from the painful existence that Cade had to endure. But appearances can be deceiving. Kiss Me That Way delivered some hard truths about pride, life and prejudice. It takes a strong person to endure the obstacles that Monroe and Cade did and rise above the anger and bitterness.