Meet the Maverick Billionaires—sexy, self-made men from the wrong side of town who survived hell together and now have everything they ever wanted. But when each Maverick falls head-over-heels for an incredible woman he never saw coming, he will soon find that true love is the only thing he ever really needed... 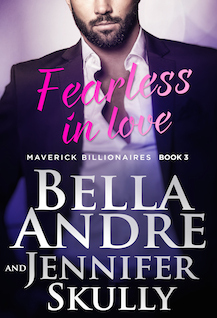 After growing up dirt poor in a seedy Chicago neighborhood, Matt Tremont seemingly has it all now—brains, brawn, and billions. And most importantly, Noah, his five-year-old son, the one good outcome of a disastrous relationship that destroyed his last ounce of trust. The only thing he’s lacking is the perfect nanny for his son. And Ariana Jones is absolute perfection. Utterly enchanting. Completely fascinating. And totally off limits.

Like a match made in heaven, this is Ari's dream job. Swallowed up in the foster care system after losing her brother and mother, Ari has always dreamed of family. She showers five-year-old Noah with all the love she’s kept bottled up inside. Love she could also offer to her gorgeous billionaire boss—if only he weren’t the very last man she could ever hope to have.

But when sizzling sparks of attraction turn into a forbidden, sinfully hot night of pleasure, will Ari’s love be enough to make Matt forget the past and love fearlessly?

Fearless In Love by Bella Andre


I have had the pleasure of following the Maverick Millionaires from the very beginning and have found every single story to be an inspiration. A celebration of the resilience of the human spirit. Fearless in Love examines the hurts, longing and obstacles of Matt and Ari. Matt has hard earned wealth, a beautiful little boy and years of mistrust and pain that have turned into a cynical human being. Ari has abandonment issues that leave her longing for the love of a lost family but despite the odds she has managed to remain an optimist. Myself, I couldn't have stayed as upbeat as Ari after foster care and losing my family. It taught her to look out for herself but It also helped her to appreciate the blessings she did have and it's unbelievable that her hope of one day finding happiness kept her pushing on. Fearless In Love has a message that is beautiful at the center of all the pain and longing. The power of love and hope can win out over some of the darkest obstacles.
View all my reviews
CATCH UP!  READ THE FIRST TWO BOOKS OF THE MAVERICK MILLIONAIRES SERIES.

Sebastian Montgomery rose from nothing to become one of the most powerful media moguls in the world. Yet beneath the seemingly perfect façade of his life, the past still haunts him. Because when he lost his parents in his teens, he also lost his faith in love. When he discovers Charlie Ballard and her incredible metal sculptures, he is awed, inspired—and he can’t help feeling things he swore never to let himself feel again. Soon, Sebastian wants not only Charlie’s art, he wants her as a woman, too. More than he’s ever wanted anything in his life. And what a Maverick wants, he always gets…

For Charlie, Sebastian offers the commission of a lifetime. Creating a magnificent sculpture for his new headquarters is a dream come true, but falling for the spellbinding billionaire isn’t part of the plan...until his luscious kisses entice her into total recklessness. He fascinates and captivates her, and as Charlie learns more about the dark depths of Sebastian’s past, all she wants is to heal him with her love. But can a man who has grown up thinking love is toxic ever believe that true love is real?

REVIEW:  RECKLESS IN LOVE (THE MAVERICK BILLIONAIRE'S #2) BY  Bella Andre and Jennifer Skully

Reckless In Love by Bella Andre


Reckless in Love is a true work of art. Sebastian is ambitious, haunted, wealthy and incredibly sexy. Even with all he has accomplished within his life he is still that broken little boy that believes himself to be unlovable and incapable of love. Charlie is all that Sebastian lacks. She has a big heart and is a gifted artist seeking a niche in a world full of beauty and emotional pitfalls. Sebastian sees in her what is lacking in himself and is instantly captivated. I fell for both characters and all of the idiosyncrasies that created the complex people that came through on every page. Individually Bella Andre and Jennifer Skully may seem different but with The Maverick Millionaire series have united and created something so special that it has to be read. I received an ARC of Reckless in Love in exchange for an honest review.

Will Franconi has a dark past that he's kept a closely guarded secret―very few people have ever heard his real story and he plans to keep it that way. After surviving a hellish childhood, he's now living the dream life where everything he touches turns to gold. But something’s missing. He doesn't quite know what until a simple letter from a teenage boy brings Harper Newman into his life. A woman who just might fill up the empty places inside him...if only he could ever be worthy of her love.

When a man has more money than he could possibly spend in five lifetimes, Harper has to ask herself what Will Franconi could possibly want from a woman like her? She's learned the hard way that rich men always get what they want no matter the cost. If it was just herself she had to worry about, Harper would manage, but she's guardian to her younger brother who depends on her for everything. After nearly losing his life in a car crash, she's vowed never to let anyone hurt him ever again.

Still, sometimes Harper can't help but long to change her story from one of an always-cautious woman to an adventurous tale of a heroine who's wild and free...especially when Will's kisses and caresses make her utterly breathless. And as he begins to reveal his story to her, she discovers that he's so much more than just another wealthy, privileged man. He's kind and giving, and he fills up all the spaces inside of her heart that have been empty for so long. Together, can they rewrite their stories into a happily-ever-after that neither of them had previously thought was possible?

REVIEW:  BREATHLESS IN LOVE (THE MAVERICK BILLIONAIRE'S #1) BY  Bella Andre and Jennifer Skully

Breathless In Love by Bella Andre


The Maverick Billionaires series is off to an exciting start. Breathless In Love has all the things I look for as a reader of romance. Romance (of course), depth, excitement, moments that touch the heart, strong central characters and sexual chemistry. Will and Harper have each experienced life through the school of hard knocks. But they never give up and that is what makes Breathless In Love an explosive and endearing start to what looks to be an awesome series. Received an ARC of Breathless In Love (The Maverick Millionaire, #1) for an honest review.