BLOG TOUR: HAPPY EVER AFTER IN CHRISTMAS (CHRISTMAS, COLORADO) BY DEBBIE MASON 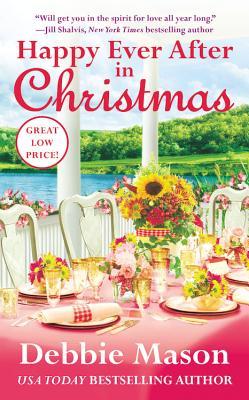 HAPPY EVER AFTER IN CHRISTMAS (CHRISTMAS, COLORADO) BY DEBBIE MASON

As her thirtieth birthday approaches, deputy Jill Flaherty decides it's time to live a little. When she walks into Sawyer Anderson's bar in her sexiest dress, she's not thinking that he's her brother's best friend or about the many women he dated during his years as a pro hockey player. All she's thinking is that it's finally time to confess to her longtime crush how she truly feels.

Sawyer is done being a player on and off the ice. Yet no one in the small town of Christmas seems to believe he's ready to settle down, not Jill, and certainly not Jack, who is determined to keep Sawyer from breaking his little sister's heart. But as Sawyer and Jill's relationship heats up, can he prove that he's her happy ever after?

REVIEW:  HAPPY EVER AFTER IN CHRISTMAS (CHRISTMAS, COLORADO) BY DEBBIE MASON

Happy Ever After in Christmas by Debbie Mason


Jill wants more than to be the tomboy little sister or just one of the guys. She wants to feel like a sexy woman for a change and knows just the man to help her fulfill that dream. Debbie Mason adds style to her romances. Her Christmas Colorado series mixes small town vibe with sugary sentiment and heated romance. Risking it all Jill offers her heart and body to the one man that personifies all her hopes and fears. Sawyer was fun, sweet and clueless. His actions caused a great deal of heartache and chaos. Unintentionally. I like reading Ms. Mason's Christmas series because at the end, I leave feeling warm and fuzzy. She can cast her spell on me anytime.

Deputy Jill Flaherty sat at her desk wrapping her brother's birthday present for his surprise party tonight. The yellow helium balloons she'd ordered were currently bouncing in front of her face. She lifted her hand to bat them way, ripping the paper off the present in the process. A present that she'd been painstakingly wrapping for the last ten minutes. Frustrated, she swore under her breath while shaking her fingers to free them of the tape and brightly-colored tissue paper.
"You're stuck," Suze announced in an authoritative voice from behind her computer.
"Thank you for your insightful observation," Jill grumbled at the forty-something woman sitting at the dispatcher's desk across the room as she bent her head to pull the tape off her fingers with her teeth.
Suze leaned around her computer and grinned. "I didn't mean literally. I mean you're stuck, stuck. That's why you've been so bitchy lately. You have the pre-30 birthday blues."
"It's my fingers that are stuck, not me. And I'm not. . . " Jill sighed. "Okay, so maybe I have been a little bitchy. But it's because of all the overtime I've been putting in the past couple of weeks. I'm tired."
She ignored the reference to her thirtieth birthday. She wouldn't admit to Suze that she was partially right. Like an ominous black cloud, the big 3-0 loomed large in Jill's mind. It always had. Her mother died two days before her thirtieth. Preparations for Jack's thirty-seventh birthday had served to remind Jill that her thirtieth was only five months away.
"Because you don't have a life."
Jill lifted a hand still covered in tape and paper in an are-you-kidding-me gesture. "I do so. I have--"
"Yeah, yeah, I know. You have friends and family and a job you love. Still doesn't mean you have a life. You put yours on hold when Jack was MIA. I had a front row seat so I know what I'm talking about."
"I have a life," Jill reiterated without elaborating. Suze had stolen her ammunition. If having friends, family, and a job she loved didn't count, Jill didn't know what else to say.
A chair scraped noisily on the tile floor and Suze took a seat across from her. "Okay, so tell me, when was the last time you hid the salami?" she asked.
Jill frowned. "What . . ."
Suze rolled her brown eyes as she peeled the last of the tape and tissue paper from Jill's fingers. "Bumped uglies. . . Did the horizontal mumbo?"
"I have no idea what you're--"
"Oh for godsakes, when was the last time you got laid?"
Since the answer didn't immediately pop into her head, Jill hedged, "What does that have to do with anything?"
"And there's your problem. You can't remember, can you?" Suze said as she rolled the paper and tape into a ball.
"Yes, I can. Seven months ago," she said, taking a guess. Then realizing the number of months might unwittingly validate Suze's no-life pronouncement, Jill added, "Before you say anything, I've been busy."
Suze pursed her lips and tossed the ball into the garbage can. "Don't buy two-sided tape again. And it was eight months ago with that accountant from Logan County."
"Really? Huh. I could have sworn . . . " She took in the I-told-you-so look on Suze's lightly freckled face. "Oh, come on, that doesn't mean anything."
"Yeah, it does. It says it all. You have unmemorable sex with unmemorable men. And do you know why you do?"
"No, but I'm sure you're going to enlighten me," Jill said, carefully working the rest of the paper off Jack's present with a pair of scissors.
"Fear," Suze said, taking the scissors from Jill's hand and looking her in the eyes. "You're afraid to get your heart broken. That's why you spend your time fantasizing about the man and life you want and not doing anything about it."
"I do not fantasize about Sawyer," Jill blurted without thinking. She caught the triumphant look in Suze's eyes and quickly added, "Or any other man in town."

ABOUT THE AUTHOR:  DEBBIE MASON
Debbie Mason is the USA Today bestselling author of the Christmas, Colorado series. Her books have been praised for their "likable characters, clever dialogue and juicy plots" (RT Book Reviews). She also writes historical paranormals as Debbie Mazzuca. Her MacLeod series has received several nominations for best paranormal as well as a Holt Medallion Award of Merit. When she isn't writing or reading, Debbie enjoys spending time with her very own real-life hero, their four wonderful children, two adorable grandbabies, and a yappy Yorkie named Bella.
Website
http://authordebbiemason.com/index.html
Twitter
AuthorDebMason
Posted by Isha C. at 12:00 AM